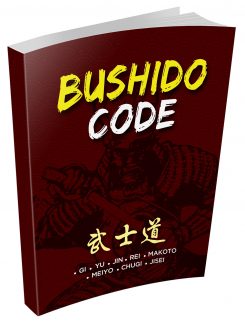 The Path to Enlightenment

“Bushido as an independent code of ethics may vanish, but its power will not perish from the earth; its schools of martial prowess or civic honor may be demolished, but its light and its glory will long survive their ruins. Like its symbolic flower, after it is blown to the four winds, it will still bless mankind with the perfume with which it will enrich life.” - InazoNitobe, Bushido: The Soul of Japan. A Classic Essay on Samurai Ethics.

Bushido (???) is a Japanese term (direct translation : bu - Military; shi - Knight; Do - Ways), which loosely translated, means The Way of the Warrior. Historically, this was known as the Japanese warrior - Samurai code of conduct. Now, to most people, Samurai means Japanese warrior. This is not entirely wrong, but it obscures the true nature of the Samurai. In Japanese, Samurai (?) actually means“To Serve”. It is not a Way of Violence, but of Service. However, it is not the only code of conduct to ever exist in history. There is the Chivalry Code Of Conduct that was once practiced by the knights of Europe, and also the Spartan Code of Honor - created by the famed indomitable warriors of ancient times whose codes included an actual law that made it illegal to retreat in battle. All of these codes have their own appeal, but are not the subject of this book today. The Way of The Samurai is quite well known compared to the many warrior codes out there, due to its practice of self-disembowelment (Seppuku)(??) and the belief that honor was more important than life. It has also received much attention in recent times due to its portrayal in Hollywood movies such as The Last Samuraior 47 Ronin, with Bushido being the central theme of both movies. So, what does this have to do with our lives?

Let us start by considering the term Warrior. Are you a warrior? The definition of a warrior is “a person engaged in some struggle or conflict”, i.e. someone who FIGHTS.By this definition, we are all warriors. Whether against poverty, hunger, disease… or against less physical issues like racism, sexism, insignificance, we spend our lives fighting. As warriors. Yes, if you hadn't realized before this, you are indeed, a warrior ; life spares none of us, whether you are man or woman, child or adult, from struggles. And therefore, you need a warrior’s code, a guide on how to live and fight… that is, if you wish to be a SUCCESSFULwarrior. If you wish to win. Who doesn't like winning, after all? Why not make use of the wisdom and experience of the warriors who have walked the path before us?

What about the term Way? What Way would this be? The way to the success?The way to make money? No, the usage of the term Way in this context means life principles, ethics, a guide to living according to a code. So, the Bushido can be simply explained as the life principles of a warrior - the guide to living as one. Since we are all warriors in our own right, the Bushido could be our Way and our guide in our individual battles. This brings us to the purpose of this book, which is to introduce you to the ancient code that is Bushido, and to bring to your attention to the benefits of applying the tenets and wisdom of Bushido to your life and your battles. Throughout this book, you will see quotes from the Samurai who have walked the Way before us, as well as from Dr. InazoNitobe, who deserves a special mention for his authoritative treatise on the Bushido code - Bushido: The Soul of Japan, which has led many (including the author himself) to a deeper understanding of Bushido. Inspired by DrInazo’s work that dates back 100 years, the author had a deep desire to share with others a more modern application of Bushido. This led to the writing of this book - Bushido : Where Honor Is Stronger Than Steel. Are you ready? Let us set out then, to seek the Way together.

“Rectitude is one’s power to decide upon a course of conduct in accordance with reason, without wavering; to die when to die is right, to strike when to strike is right.” - Anonymous Japanese Samurai

No, the first principle that a warrior needs to learn in the Bushido Code, is righteousness. Justice. The rightness of his/her cause. I do not refer to self-righteousness, where someone thinks themselves better than another. Righteousness is the belief in justice and the effort to do the right thing in all circumstances. Think about this for a second. The Samurai considered righteousness to be the basis of Bushido, the foundation, the first step on the Way. Why choose righteousness as the first step? Consider the alternatives: if the foundation of the Way of a warrior was strength, wouldn’t the Way be just grounded in the belief that “Might is Right” ? Or if the foundation of the Way was loyalty… wouldn’t the Way result in a Loyalty to an Evil Ruler situation? Indeed, history is full of examples of warriors who swore their loyalty to evil rulers, and thus, in doing that, supported and propagated evil, because the basis of their Way was loyalty, not righteousness. Having righteousness as the basis of Bushido means that a Samurai has to think and decide whether it is RIGHTto swing his sword, before he swings it. He does not fight because he wants to be the strongest warrior, nor does he fight because he is told to fight – he fights because it is RIGHTfor him to do so. This shows that the Samurai were well aware of the weight of their actions, and the possible consequences. If you were about to get into a fight which might result in the loss of life, is it not essential to consider whether such loss of life is necessary, or whether it could be avoided? Before strength, before ability, righteousness must be considered first, the first thought in a Samurai’s mind. A Samurai deals openly and honestly with others and cleaves to the idea of justice. Moral decisions do not come in shades of grey, but only right and wrong.

Righteousness is fortunately not yet an "old-fashioned" idea; in fact, it is still relevant and very much needed in today's society.Injustice is still a common occurrenceeverywhere, be it schools, workplaces, on the streets. There are 2 aspects of righteousness that are most definitely needed in our lives. One is the determination to do what is Right, to make the Right decisions. The other is the courage to stand up against what is Wrong, to stop injustice from happening. In any of your personal battles, make sure you're fighting on the right side. I am not referring to the stronger side, but rather more correctly, on the Right side. Knowing that you are doing the right thing will give you a sense of certainty and a lack of hesitation. How can you tell? Well, that’s easy. If you’re not sure which side is the Right side, then why are you fighting? You should only “draw your sword” once you have observed and concluded that it is right to do so. Conflict in the workplace is inevitable ; conflicts are bound to happen when there are two or more people working together. As an employee, do not pick fights or get drawn into fights if you’re not sure which side is the right or wrong side. In fact, you shouldn’t pick fights at all in the first place. So, again, do not get involved if you cannot ascertain which side is in the right.

This is less about minding your own business and more about doing the Right Thing. To do the Right Thing, you need to identify what it is first. Never get into a fight with your boss unless you are certain that your position is solid and you are in the right. How about in a business setting? The application is exactly the same: be absolutely certain that your decision is based on righteousness, and not on greed or fear. Do not prioritize making a quick buck; it is rarely the right (or most profitable) choice. Also, avoid entering into business dealings with dishonest and unreliable partners, no matter how good the deal appears to be. Chances are that the deal that looks too good to be true IS, in fact, too good to be true. A wrong decision can potentially result in massive losses on your part. To avoid (or significantly reduce) the chances of that happening to you, why not sit down and carefully think it through? Basically, just make sure that you're making the right choices, for the right reasons… and that's all you need!