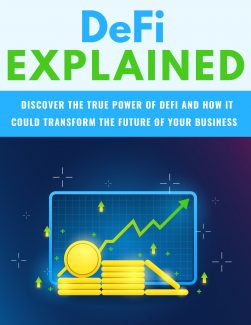 DeFi has been driving a cryptocurrency resurgence since 2020 with no sign of stopping.

But, what is DeFi and how does it work?

Decentralized finance (commonly referred to as DeFi) is a blockchain-based form of finance that does not rely on central financial intermediaries such as brokerages or banks to offer traditional financial instruments.

Instead, it utilizes smart contracts on blockchains, the most common being Ethereum.

So, now that you know what it is, how can you utilize this new technology in your own business?

That’s exactly what we’ll take a closer look in this special report.

As mentioned on the introduction page, DeFi stands for Decentralized Finance.

This means that the financial services are carried out on a blockchain instead of through a brokerage or bank.

In today’s financial world, financial institutions act as guarantors for any transactions. This gives them immense power over your money.

Decentralized Finances are services with no central authority controlling them. Decentralized exchanges allow for peer-to-peer cryptocurrency transfers with no middleman.

Forkast News calls it “the merger between traditional banking services with blockchain technology.”

DeFi involves taking traditional elements of the financial system and replacing the middleman with a smart contract.

This means DeFi needs a decentralized infrastructure to run on, like the Etherium blockchain. This blockchain is a do-it-yourself platform for DAPPS or Decentralized Applications.

About 96% of DeFi protocols operate on Etherium, although a small number have migrated to competing blockchains because of increased speed.

In decentralized transactions, the typical overseers of those transactions (banks, stockbrokers, government institutions, etc.) are replaced by blockchain.

Because users don’t need to transfer their assets to the exchange, decentralized exchanges reduce the risk of theft from hacking of the exchanges.

They’re also more anonymous than exchanges which require your identity on all transactions and can prevent price manipulation or faked trading volume.

DeFi’s goals are to utilize technology to remove intermediaries between parties in a financial transaction. Its components are stablecoins, use cases, and a software stack that allows the development of applications.

This infrastructure and use cases are still in development, though plenty of users have jumped on the DeFi bandwagon.

The Rise of DeFi

DeFi’s origin is often traced back to 2015, when a platform called MakerDAO allowed people to utilize cryptocurrency for collateral on their loans.

DeFi, like the traditional cryptocurrencies, promises to do away with the unnecessary intermediaries like banks and stockbrokers. This viewpoint Is fueling the market lately.

Bitcoin was created in 2009 as an alternative to traditional finance (and financial authorities like banks and stockbrokers), but many limitations still exist.

hile Bitcoin was meant to function like money, its functionality depends on a network of new central authorities that are acting much like the institutions they were meant to replace.

Miners, node operators, wallets, and exchanges—these authorities are showing a distinct proclivity for acting just like banks and stockbrokers.
In other words, Bitcoin doesn’t seem to be truly decentralized.

A true decentralized system should be run by the people alone. Bitcoin has given us glimpses of this but has ultimately fallen short of its goal.

With DeFi, there are no central authorities and protocol are run by smart contracts designed to eliminate foul play.

The open financial network is trustless and decentralized, facts that have attracted many investors.