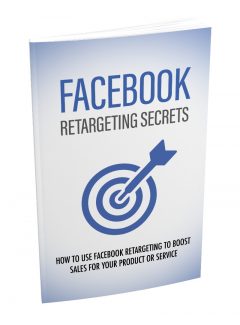 Whether they originally set out to or not, when Zuckerberg and cohorts built Facebook, they also built perhaps the most powerful marketing platform/tool ever created (only Google gives it a potential run for its money).

Facebook is a place where users will actively, willingly offer up huge amounts of data about themselves. This includes demographic data such as their age, sex, and location – but also deeply personal information such as their hobbies and interests, where they went for dinner last night, and even their income bracket.

What’s more, is that they also provide us with a huge network of other potential users that might share the same interests or have access to the same things.

This matters to us as marketers because it allows us to TARGET our audience. And as you will learn over the course of this eBook, targeted marketing is by far the most powerful.

As Facebook grew in size and functionality, its reach and usefulness as a tool for digital marketers grew in kind.

Meanwhile though, in other corners of the net, other new marketing tools would also emerge. Google was the first to introduce ‘retargeting’ to a large audience – a concept that helped advertisers reach the most targeted and qualified leads – people who had already demonstrated an interest in their brand and even a willingness to spend money.

That this feature would eventually come to Facebook was inevitable. And when it did, a perfect match was made.

Retargeting on Facebook is perhaps THE most effective way to reach a primed and ready consumer base and to make sales as a result.

In short, retargeting allows you to advertise more than once to the same people that have previously engaged with your brand –

even spent time on checkout pages, or having added specific items to their shopping cart.

The best part is that Facebook actually goes beyond the likes of Google by offering an even more powerful version of this feature – letting you remarket in numerous different ways, to numerous different types of lead and customer.

This tends to fall under the broader category of Facebook’s ‘Custom Audiences’, which can be custom for a variety of reasons.

To put it simply, if you have any product you want to sell online – whether digital or physical – Facebook retargeting might be one of the most powerful and effective ways to do just that. And not only that, but you’ll also find that this is one of the best tools for promoting a cause, increasing brand awareness, and growing your audience and your authority.

The best marketers know that success online is a matter of human psychology, numbers, and knowing the right tools. If you can invest correctly in Facebook retargeting, then you can see that money returned in huge quantities. And in this book, you’ll learn precisely how to make the most of this type of marketing to potentially grow your audience and increase your profits.

So, the basic idea behind Facebook retargeting, is that you’re able to ‘remarket’ to people who have already spent time on your site, or even on specific pages from within your site. This is powerful stuff, because it means that you can market to warm, hot, and qualified leads.

Let’s rewind for a moment and think about what that means. Normally, when you show someone an advert, you do so while knowing very little about them, and having had no contact with them previously. You might be browsing the web and then notice an advert for something that you have never heard of. A nice pair of shoes for instance, a holiday, a useful service.

Problem is, you just bought a pair of shoes, you’re just back from holiday, and you have no use for the service because you don’t have a house (for example).

So, chances are that you’re simply going to scroll right past that ad and not give it any further thought. This was then essentially a wasted investment for the advertiser who put that advert there in the first place.

That’s why a targeted ad is theoretically worth so much more than a regular ad. When an ad is targeted, it means that it is being purposefully aimed only at people who are likely to be interested in whatever the advert is for – at least based on their demographics and statistics.

All of this ensures that the money is not wasted nearly as often. But it’s still not perfect. Because it’s still advertising to someone that you’ve had no prior contact with – who has never heard of your brand.

Because you know the brand. You’ve learned what they have to offer and you know that they typically provide a certain level of quality.

You would buy a hugely expensive tablet from Apple because of the trust and authority they have built up over decades. Btu now imagine that someone comes up to you in the street and offers you a thousand dollar computer that has no branding on it. Would you be willing to pay a thousand dollars for that? Would you trust that it works?

Even if you’re in the market for a tablet?

It only takes a minute to go to the Apple website, or another retailer that stocks those devices – such as Amazon. So why would you spend money on an unknown commodity?

That’s why big companies will spend millions on advertising that is designed to increase brand visibility first. From that point, the customers will then come to them rather than vice versa. Most of us smaller marketers don’t have that kind of budget though, so we don’t have the luxury to build that kind of awareness and visibility. That’s why we instead use content marketing.

Content marketing is marketing that uses blog posting, YouTube, social media and whatever else in order to create a relationship with the customer. To demonstrate that we know what we’re talking about, that we are trustworthy, and that we are able to offer something unique.

If you read an incredibly blow post about fitness and that author then recommends a supplement at the end of the post, you’re now much more likely to be successful.