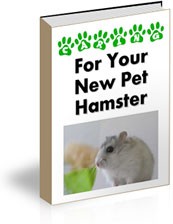 Pet stores can provide basic food for hamsters that provides their nutritional needs, but they also enjoy fresh vegetables and fruits, bird seed, and even living insects, which make up an important part of their natural diet. However, not any nutrition is suitable for hamsters and some food, such as sweets made for humans or poisonous plants like the leaves of the tomato, may be most dangerous for the hamster's health. Like with most other animals (and humans), it is not true that hamsters can decide which food is good for them and they will usually eat anything that is offered.

Hamsters should also always have fresh water available. Appropriate drinking devices can be found in stores. Being small animals that are adapted to the life in arid environments, hamsters can also ingest all necessary liquid via sufficient amounts of watery vegetables, such as cucumber, without any negative effects. However, providing water is usually more convenient and can be an easy way to add medication or vitamins to the hamsters diet. Both water and vegetables must be fresh and have to be exchanged frequently, usually once a day. Water must not be given in open jars, since it is likely to be polluted and because wetness is generally very unhealthy for hamsters (that clean themselves very carefully without the need of additional water).

In detail, the solid food components can be divided into three categories: dry, fresh, and animal food. Dry food makes up the bulk of a hamster's diet. Besides the standard rodent food sold in local area pet stores, most other kinds of seeds, kernels, and nuts can be given. Care should be taken to limit the amount of fat contained within the diet. Especially sunflower seeds, nuts, almonds, and sesame are most nutritive and are to be considered as a treat rather than as basic food. All kinds of grain, rice, noodles (dry), dry peas and lentils on the other hand can be provided less restrictively: about 120 g for a medium hamster and, depending on size, about half the amount for a dwarf hamster is sufficient. Bread and similar bakery products contain many ingredients (e.g. yeast) that can trouble the hamster's digestion system. They should be given in small amounts for gnawing or be replaced by special wafers as found in pet stores. All dry food should be appropriate in size. Especially small hamsters often cannot cope well with large seeds, even if they are sold under the label "hamster food". Bird food like millet is a noteworthy alternative for small hamsters.

Hay, although also belonging to the dry food category, can be provided in large amounts at any time. It does not contain notable amounts of fat, still is liked by most hamsters, supports the hamster's digestion system, serves as a hiding place, and is often used for nest building. In addition it is cheap and can even be produced in your own garden easily.

Fresh food is also an important part of the hamster's diet. As mentioned above, cucumber is a good supplement of water. Fresh grass, carrot, all kinds of lettuce, leaves and even branches' of (non-poisonous) plants are also no problem in general. However, no conifer wood must be fed since resin is poisonous for hamsters. In smaller amounts, grown hamsters also appreciate apple, pear, sweet paprika, tomato (only red parts), banana, mango, strawberry, and even small pieces of orange. Too much sweet fruits on the other hand are not healthy. All kinds of cabbage should be avoided, since they may cause flatulence, which is quite dangerous for the hamster's sensitive digestion system.

Very young hamsters (6-8 Weeks) should eat only carrots and small grains. Even water can damage their digestion system and be a deadly danger. Ill hamsters are also preferably provided with a more conservative diet. If accepted, herbs can also help to strengthen the hamster's health, though they cannot replace a veterinarian in case of a disease. Daisies (the flowers, not the stems or leaves) and dandelions are likewise appreciated. Plants used for hamster foods should never be placed near open windows because hamsters are more sensitive to chemical pollutions, due to their small body weight.

Finally animal food is a major component of some hamsters' natural food. As pets, a large part of this can be replaced by dry food. Still, hamsters need some animal proteins for their health. While some people like to provide living insects from pet stores to their hamsters, others will prefer to give them dry dog biscuits. Some hamsters are known to accept yoghurt (natural, without sweet ingredients) or soft cheese (low fat, not too salty), and in any case egg noodles are usually taken gratefully. If (dry or soft) dog or cat food is given, then the fat content has to be checked carefully. Furthermore, it must not contain molasses, which would harm the hamster.