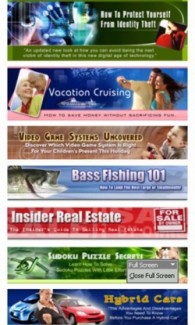 CHAPTER 4: WHAT TO DO WHEN ID THEFT OCCURS

All right, so it happened. Even with all of the precautions and care you’ve taken to protect yourself from those spineless and despicable thieves, somehow and someway they found a way to the inside…to the inside your personal and financial life that is. Now don’t be too hard on yourself.

I know that you’re saying to yourself right now, “I did everything I could possibly do. I took the time to make myself aware and educate myself on the facts and this still happened…why?” Well, unfortunately sometimes there is no real answer to the question why, it just is what it is. You have to keep in mind that these perpetrators are professionals and they will stop at nothing to achieve their goal.

Just like you go to work everyday and perform your job with the proficiency and skills that you have acquired, so do they. Their job everyday is to rip off honest, hardworking and innocent people such as you and I. It’s not fair and it never will be. They have made a huge mess of your life and you are the one who is stuck with the task of picking up the pieces and turning things right again. Sometimes you can build that fence higher, make the bridge more difficult to cross and even fill the moat with alligators, but inevitably there will always remain a weak and penetrable spot.

Identity thieves are adept at looking for and seeking out those particular spots. The most important thing for you to keep in mind right now is that regardless of how much damage was done and how bad the situation looks at present, it could always be worse. Think about what would have happened had you not already been so familiar with how identity theft works. You may not have been able to prevent it but you certainly knew how to recognize the fact that it was happening to you.

The signs were there and you didn’t just dismiss them, as many others would have this early in the process. Maybe you noticed that your credit card statements had not arrived at the time of month that they generally should have. Perhaps during regular review of your bank statements you noticed some unusual transactions that you had not made.

Maybe in looking more closely at the checks that had been returned to you from the bank you realized that one or several of them were made payable to an unknown individual, tipping you off to the fact that some of your checks had been stolen. Whatever the situation, you are to be congratulated for catching on so quickly. You now have the ability to stop this thief cold in his tracks and prevent him/her from violating your privacy any further. This could have gone on for months and months or perhaps even years and in the process could have resulted in hundreds or thousands of dollars worth of built up debt and a lifetime of rebuilding the reputable line of credit you once had.