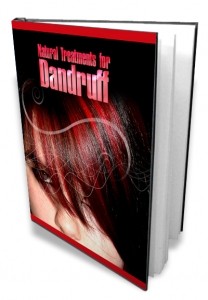 There are some anti-dandruff shampoos that are based on natural or relatively natural substances that you might want to consider using as an alternative to those that contain potentially damaging chemicals.

The two most common and widely available commercially produced shampoos that are based on natural substances are those which use tea tree oil or coal tar.

Tea tree oil or Melaleuca oil is taken from the Melaleuca alternifolia tree that is found on the north-east coast of New South Wales in Australia. It is a natural antibacterial, antiseptic, germicidal and fungicidal oil that had been used for hundreds of years as a medicinal treatment for a huge range of medical conditions by the native peoples of Australia.

Given all of these qualities possessed by tea tree oil, it is not surprising that it should be an effective additive to many leading brands of antidandruff shampoo. The natural antifungal qualities of tea tree oil will help to keep down the amount of yeast on your scalp, with most commercially produced tea tree oil based shampoos containing around 5% of the oil, which has been shown to be the most effective concentration in a commercially produced shampoo.

In fact, extensive research in Australia as reported in 2002 in the Journal of the American Academy of Dermatology indicated that a tea tree oil shampoo with 5% concentration of oil improved dandruff for 41% of people tested. From this statistic, there can be little doubt that tea tree oil shampoo is probably the most effective of the commercially produced shampoos based on natural substances for minimizing the worst effects of dandruff.

It is also effective for getting rid of head lice as well, so if it is lice that are causing what appeared to be a dandruff problem, this is an easy way to get rid of your unwanted guests.

There are no known adverse side-effects from using tea tree oil, although it is not a substance that you can ingest, so if you get tea tree oil shampoo in your mouth, you should immediately rinse it out with a plentiful supply of water.

Shampoo that is based on coal tar uses a substance that is produced as a byproduct of the carbonization of coal. Coal tar shampoo is often an effective treatment for dandruff, although because there is some concern that using coal tar in too great a concentration might possibly have some carcinogenic elements, you should ensure that any coal tar shampoo you use contains only a trace of coal tar.

Because dandruff is a chronic condition the cause of which is still not completely established or agreed, the range of possible solutions that are claimed to work to treat the condition are almost endless.