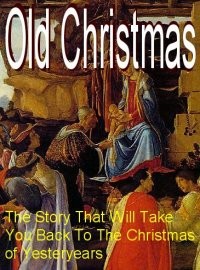 Our breakfast consisted of what the Squire denominated true old English fare. He indulged in some bitter lamentations over modern breakfasts of tea-and-toast, which he censured as among the causes of modern effeminacy and weak nerves, and the decline of old English heartiness; and though he admitted them to his table to suit the palates of his guests, yet there was a brave display of cold meats, wine, and ale, on the sideboard.

After breakfast I walked about the grounds with Frank Bracebridge and Master Simon, or Mr. Simon as he was called by everybody but the Squire. We were escorted by a number of gentleman-like dogs, that seemed loungers about the establishment; from the frisking spaniel to the steady old staghound; the last of which was of a race that had been in the family time out of mind: they were all obedient to a dog-whistle which hung to Master Simon’s buttonhole, and in the midst of their gambols would glance an eye occasionally upon a small switch he carried in his hand.

The old mansion had a still more venerable look in the yellow sunshine than by pale moonlight; and I could not but feel the force of the Squire’s idea, that the formal terraces, heavily moulded balustrades, and clipped yew-trees, carried with them an air of proud aristocracy. There appeared to be an unusual number of peacocks about the place, and I was making some remarks upon what I termed a flock of them, that were basking under a sunny wall, when I was gently corrected in my phraseology by Master Simon, who told me that, according to the most ancient and approved treatise on hunting, I must say a MUSTER of peacocks. “In the same way,” added he, with a slight air of pedantry, “we say a flight of doves or swallows, a bevy of quails, a herd of deer, of wrens, or cranes, a skulk of foxes, or a building of rooks.” He went on to inform me, that, according to Sir Anthony Fitzherbert, we ought to ascribe, to this bird “both understanding and glory; for, being praised, he will presently set up his tail chiefly against the sun, to the intent you may the better behold the beauty thereof. But at the fall of the leaf, when his tail falleth, he will mourn and hide himself in corners, till his tail come again as it was.”

I could not help smiling at this display of small erudition on so whimsical a subject; but I found that the peacocks were birds of some consequence at the Hall, for Frank Bracebridge informed me that they were great favourites with his father, who was extremely careful to keep up the breed; partly because they belonged to chivalry, and were in great request at the stately banquets of the olden time; and partly because they had a pomp and magnificence about them, highly becoming an old family mansion. Nothing, he was accustomed to say, had an air of greater state and dignity than a peacock perched upon an antique stone balustrade.

Master Simon had now to hurry off, having an appointment at the parish church with the village choristers, who were to perform some music of his selection. There was something extremely agreeable in the cheerful flow of animal spirits of the little man; and I confess I had been somewhat surprised at his apt quotations from authors who certainly were not in the range of every-day reading. I mentioned this last circumstance to Frank Bracebridge, who told me with a smile that Master Simon’s whole stock of erudition was confined to some half-a-dozen old authors, which the Squire had put into his hands, and which he read over and over, whenever he had a studious fit; as he sometimes had on a rainy day, or a long winter evening. Sir Anthony Fitzherbert’s “Book of Husbandry;” Markham’s “Country Contentments;” the “Tretyse of Hunting,” by Sir Thomas Cockayne, Knight; Izaak Walton’s “Angler,” and two or three more such ancient worthies of the pen, were his standard authorities; and, like all men who know but a few books, he looked up to them with a kind of idolatry, and quoted them on all occasions. As to his songs, they were chiefly picked out of old books in the Squire’s library, and adapted to tunes that were popular among the choice spirits of the last century. His practical application of scraps of literature, however, had caused him to be looked upon as a prodigy of book-knowledge by all the grooms, huntsmen, and small sportsmen of the neighbourhood.