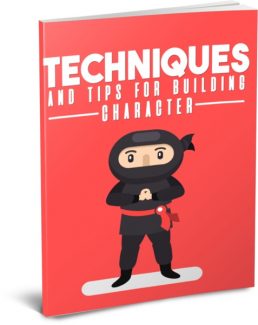 Techniques and Tips for Building Character

UNCONSCIOUSLY we are forming habits every moment of our lives.

Some are habits of a desirable nature; some are those of a most undesirable nature. Some, though not so bad in themselves, are exceedingly bad in their cumulative effects, and cause us at times much loss, much pain and anguish, while their opposites would, on the contrary, bring as much peace and joy, as well as a continually increasing power.

Have we it within our power to determine at all times what types of habits shall take form in our lives? In other words, is habit-forming, character building, a matter of mere chance, or have we it within our own control? We have, entirely and absolutely. "I will be what I will to be," can be said and should be said by every human soul.

After this has been bravely and determinedly said, and not only said, but fully inwardly realized, something yet remains. Something remains to be said regarding the great law underlying habit-forming, character building; for there is a simple, natural, and thoroughly scientific method that all should know.

Thought is the force underlying all. And what do we mean by this? Simply this: Your every act - every conscious act - is preceded by a thought. Your dominating thoughts determine your dominating actions. In the realm of our own minds we have absolute control, or we should have, and if at any time we have not, then there is a method by which we can gain control, and in the realm of the mind become thorough masters. In order to get to the very foundation of the matter, let us look to this for a moment. For if thought is always parent to our acts, habits, character, life, then it is first necessary that we know fully how to control our thoughts.

Here let us refer to that law of the mind which is the same as is the law in Connection with the reflex nerve system of the body, the law which says that whenever one does a certain thing in a certain way it is easier to do the same thing in the same way the next time, and still easier the next, and the next, and

the next, until in time it comes to pass that no effort is required, or no effort worth speaking of; but on the opposite would require the effort. The mind carries with it the power that perpetuates its own type of thought, the same as the body carries with it through the reflex nerve system the power which perpetuates and makes continually easier its own particular acts. Thus, a simple effort to control one's thoughts, a simple setting about it, even if at first failure is the result, and even if for a time failure seems to be about the only result, will in time, sooner or later, bring him to the point of easy, full, and complete control.

Each one, then, can grow the power of determining, controlling his thought, the power of determining what types of thought he shall and what types he shall not entertain. For let us never part in mind with this fact, that every earnest effort along any line makes the end aimed at just a little easier for each succeeding effort, even if, as has been said, apparent failure is the result of the earlier efforts. This is a case where even failure is success, for the failure is not in the effort, and every earnest effort adds an increment of power that will eventually accomplish the end aimed at. We can, then, gain the full and complete power of determining what character, what type of thoughts we entertain.

Shall we now give attention to some two or three concrete cases? Here is a man, the cashier of a large mercantile establishment, or cashier of a bank. In his morning paper he reads of a man who has become suddenly rich, has made a fortune of half a million or a million dollars in a few hours through speculation on the stock market. Perhaps he has seen an account of another man who has done practically the same thing lately. He is not quite wise enough, however, to comprehend the fact that when he reads of one or two cases of this kind he could find, were he to look into the matter carefully, one or two hundred cases of men who have lost all they had in the same way. He thinks, however, that he will be one of the fortunate ones. He does not fully realize that there are no short cuts to wealth honestly made. He takes a part of his savings, and as is true in practically all cases of this kind, he loses all that he has put in, Thinking now that he sees why he lost, and that had he more money he would be able to get back what he has lost, and perhaps make a handsome sum in addition, and make it quickly, the thought comes to him to use some of the funds he has charge of. In nine cases out of ten, if not ten cases in every ten, the results that inevitably follow this are known sufficiently well to make it unnecessary to follow him farther.

Where is the man's safety in the light of what we have been considering?

Simply this: the moment the thought of using for his own purpose funds belonging to others enters his mind, if he is wise, he will instantly put the thought from his mind. If he is a fool, he will entertain it. In the degree in which he entertains it, it will grow upon him; it will become the absorbing thought in his mind; it will finally become master of his will power, and through rapidly

succeeding steps, dishonor, shame, degradation, penitentiary, remorse will be his. It is easy for him to put the thought from his mind when it first enters; but as he entertains it, it grows into such proportions that it becomes more and more difficult for him to put it from his mind; and by and by it becomes practically impossible for him to do it. The light of the match, which but a little effort of the breath would have extinguished at first, has imparted a flame that is raging through the entire building, and now it is almost if not quite impossible to conquer it.

Shall we notice another concrete case? A trite case, perhaps, but one in which we can see how habit is formed, and also how the same habit can be unformed. Here is a young man, he may be the son of poor parents, or he may be the son of rich parents; one in the ordinary ranks of life, or one of high social standing, whatever that means. He is good hearted, one of good impulses generally speaking, a good fellow. He is out with some companions, companions of the same general type. They are out for a pleasant evening, out for a good time. They are apt at times to be thoughtless, even careless. The suggestion is made by one of the companies, not that they get drunk, no, not at all; but merely that they go and have something to drink together. The young man whom we first mentioned, wanting to be genial, scarcely listens to the suggestion that comes into his inner consciousness that it will be better for him not to fall in with the others in this. He does not stop long enough to realize the fact that the greatest strength and nobility of character lies always in taking a firm stand on the aide of the right, and allow himself to be influenced by nothing that will weaken this stand. He goes, therefore, with his companions to the drinking place. With the same or with other companions this is repeated now and then; and each time it is repeated his power of saying "No" is gradually decreasing. In this way he has grown a little liking for intoxicants, and takes them perhaps now and then by himself. He does not dream, or in the slightest degree realize, what way he is tending, until there comes a day when he awakens to the consciousness of the fact that he hasn’t the power nor even the impulse to resist the taste which has gradually grown into a minor form of craving for intoxicants. Thinking, however, that he will be able to stop when he is really in danger of getting into the drink habit, he goes thoughtlessly and carelessly on. We will pass over the various intervening steps and come to the time when we find him a confirmed drunkard. It is simply the same old story told a thousand or even a million times over.