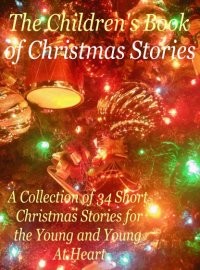 Once upon a time, a long, long time ago, on the night before Christmas, a little child was wandering all alone through the streets of a great city. There were many people on the street, fathers and mothers, sisters and brothers, uncles and aunts, and even gray-haired grandfathers and grandmothers, all of whom were hurrying home with bundles of presents for each other and for their little ones. Fine carriages rolled by, express wagons rattled past, even old carts were pressed into service, and all things seemed in a hurry and glad with expectation of the coming Christmas morning.

From some of the windows bright lights were already beginning to stream until it was almost as bright as day. But the little child seemed to have no home, and wandered about listlessly from street to street. No one took any notice of him except perhaps Jack Frost, who bit his bare toes and made the ends of his fingers tingle. The north wind, too, seemed to notice the child, for it blew against him and pierced his ragged garments through and through, causing him to shiver with cold. Home after home he passed, looking with longing eyes through the windows, in upon the glad, happy children, most of whom were helping to trim the Christmas trees for the coming morrow.

of it may be for me.” So with timid steps he approached a large and handsome house. Through the windows, he could see a tall and stately Christmas tree already lighted. Many presents hung upon it. Its green boughs were trimmed with gold and silver ornaments. Slowly he climbed up the broad steps and gently rapped at the door. It was opened by a large man-servant. He had a kindly face, although his voice was deep and gruff. He looked at the little child for a moment, then sadly shook his head and said, “Go down off the steps. There is no room here for such as you.” He looked sorry as he spoke; possibly he remembered his own little ones at home, and was glad that they were not out in this cold and bitter night. Through the open door a bright light shone, and the warm air, filled with fragrance of the Christmas pine, rushed out from the inner room and greeted the little wanderer with a kiss. As the child turned back into the cold and darkness, he wondered why the footman had spoken thus, for surely, thought he, those little children would love to have another companion join them in their joyous Christmas festival. But the little children inside did not even know that he had knocked at the door.

The street grew colder and darker as the child passed on. He went sadly forward, saying to himself, “Is there no one in all this great city who will share the Christmas with me?” Farther and farther down the street he wandered, to where the homes were not so large and beautiful. There seemed to be little children inside of nearly all the houses. They were dancing and frolicking about. Christmas trees could be seen in nearly every window, with beautiful dolls and trumpets and picture-books and balls and tops and other dainty toys hung upon them. In one window the child noticed a little lamb made of soft white wool. Around its neck was tied a red ribbon. It had evidently been hung on the tree for one of the children. The little stranger stopped before this window and looked long and earnestly at the beautiful things inside, but most of all was he drawn toward the white lamb. At last creeping up to the window-pane, he gently tapped upon it. A little girl came to the window and looked out into the dark street where the snow had now begun to fall. She saw the child, but she only frowned and shook her head and said, “Go away and come some other time. We are too busy to take care of you now.” Back into the dark, cold streets he turned again. The wind was whirling past him and seemed to say, “Hurry on, hurry on, we have no time to stop. ‘Tis Christmas Eve and everybody is in a hurry to-night.”

Again and again the little child rapped softly at door or window-pane. At each place he was refused admission. One mother feared he might have some ugly disease which her darlings would catch; another father said he had only enough for his own children and none to spare for beggars. Still another told him to go home where he belonged, and not to trouble other folks.

The hours passed; later grew the night, and colder grew the wind, and darker seemed the street. Farther and farther the little one wandered. There was scarcely any one left upon the street by this time, and the few who remained did not seem to see the child, when suddenly ahead of him there appeared a bright, single ray of light. It shone through the darkness into the child’s eyes. He looked up smilingly and said, “I will go where the small light beckons, perhaps they will share their Christmas with me.”