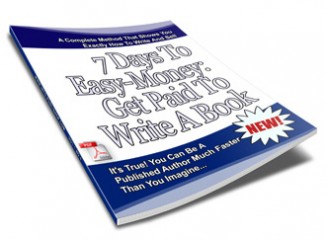 Task One: Write the initial draft of your book proposal

Write the draft quickly. Don’t think too much about it. In your initial draft, you aim for quantity, rather than quality.

Today's the big day. You're going to write your book proposal. If you're starting to freeze up at the thought, relax. You've already done a lot of preparation work, and you're not going to write it all at once. You'll write it by taking the proposal through several clearly defined stages:

A. First draft. This is your "thinking" draft, in which you think on paper. In this draft, you write whatever you like. You're aiming for quantity here, rather than quality. Write this draft full-steam ahead, without stopping to look things up. Consider "writing" this draft by talking into a tape recorder.

If you need to do some spot research, just leave a note to yourself, and keep working on the draft. You can look up individual items later. The benefit of doing specific research later is that you may find it's unnecessary. It's quite possible that you'll eliminate this material from a later draft.

Occasionally you'll want to take this shaping draft through several documents. You may have a B1, B2, B3 and B4 version, for example.

Use the "File, Save As" menu option of your word processor to keep versions of your book proposal. When you change the name of the file as you work through different versions, it means that you can always go back and reinsert something that you deleted, because it's in a previous version.

C. Your clean-up draft. Your final draft. You've said what you want to say, now you get a chance to say it better. You clean up the redundancies and spice it up.

Paradoxically, the easiest way to write well is to allow yourself to write badly. Every day. This is because writing is hard when you try to think and write at the same time. Allow yourself to think on paper for as many drafts as you need. Then write the final draft with confidence.

Woody Allen once said that 90 per cent of success at anything was just showing up. I've found that that's very true. So no matter how bad you feel your writing is at any given time, go ahead anyway. Your writing is not as bad as you think, it's simply a crisis of confidence, and even if it is rough when you first get it on the computer screen, it can be fixed. However, if you hesitate, and don’t get it on the computer screen, you have nothing to fix. Get it done!

At the end of this book, in the Appendix, you'll find the complete proposal for my book 7 Days To Easy Money: Copywriting Success. This is a real proposal, and it won an agent contract on first reading. Read it through so that you can see exactly what goes into creating a proposal.

We've already covered what your proposal must contain, here it is again, for reference. Please print this page out:

A title page, with the title, subtitle, author, word count of the completed book, and estimated time frame for completion. You might state: "75,000 words, completion three months after agreement".

An overview: a description of the book. This can be as short as a paragraph, or several pages long.

The background of the author. Your biography, as it relates to your expertise for this book.

The competition in the marketplace. This is where you mention the top four or five titles which are your book's competitors. (Note: if there are dozens of competitors for your book, this is a good thing, because it means that the subject area is popular. Your book will need to take a new slant.)

Promotions. This is where you describe how you will promote your book, both before and after publication.

A sample chapter, or two chapters. This is always the first chapter, and if you're sending two chapters, it's the Introduction and Chapter One, or if there's no Introduction, it's Chapters One and Two.

Attachments. Optional. You may want to attach articles you've written about the book's topic, or any relevant supporting material.

You've already been working on a major part of the proposal --- the chapter outline. If you like, you can begin today's work by spending an hour or two with that. If your chapter outline still has major holes in it, don't worry too much about it. Today we'll complete an initial draft of the complete proposal, and you can fill in the gaps later.

Your background—why you're the person to write this book

Next, we'll work on the background section.

The first piece of info you'll need to include in the background section is a brief bio. Every book you own has a bio of the author, so take a few books off your shelves and study the author bios. Most are short. Novelists' bios mention the writer's interests, partner, children and pets. The bios of nonfiction writers (that's you) emphasize the writer's academic credentials if it's important to the writer's credibility, or the writer's experience in the field the book covers, or anything else which might be relevant.