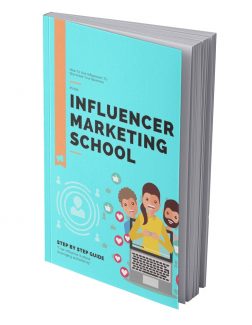 Influencer marketing is no longer something you can ignore or play trial and error with. It is a mainstream branch of digital marketing and is no longer optional, no matter the brand.

The word influencer has been around for a few years now, but many marketers and their brands are unclear on how to tap into this market to reach demographics that are still out of sight for them. Well, there is a first time for everything, but that doesn’t mean you go into it blind.

Hopefully, this book will give you a taste of the world you are about to enter. Let’s begin.

As the word suggests, an influencer is a person who can persuade their followers to change their behavior, which gives them a certain amount of control over the purchasing power of their audience on any given social media platform. There are three types of influencers on the internet today and it depends on the size of their followers.

Micro influencers have less than 10,000 followers and can help reach a specific niche audience. This might be a small club but the audience loyalty is strong.

Power middle influencers have less than 250,000 but more than 10,000 followers. They are not as big as international celebrities but have a considerable amount of influence over their followers. These influencers also have partnered with brands in the past and have some of that commercial experience.

Macro influencers are the third kind and have more than 250,000 followers. Typically, they are YouTube or Instagram celebrities and have a huge following. But it is possible that they don’t have the same level of credibility as power middle influencers, which means their impact in terms of changing buyer behavior won’t necessarily be directly proportional to the size of their following.

To begin with, influencers came into existence because it is an incredibly difficult task for brands to get and hold the attention of users on social media. As Aaron Sorkin puts it, this “theatre of short attention span” is a hard one to capture.

It is also because there are a number of brands with an online presence and the competition is quite fierce. With everyone bombarding customers with their products and services, it has become hard for users to make a decision. And the amount of self-promotion brands do, hasn’t helped their case much either because this has only made the customers skeptical.

So, there came a need for an innovative marketing strategy that did not include them talking about themselves. In short, they needed someone that customers would trust to give them a thumbs up. While celebrity endorsements have been around for that same reason, some influencers are more authentic with their followers for the sake of their own credibility. This has led to brands and influencers joining hands to make the best of the situation.

But every marketing strategy needs a plan and as popular or effective as an influencer might be, they are not the exception to this rule. Influencer marketing can achieve some very specific goals that are beneficial to both parties.

Chapter 2: What Is Influencer Marketing?

Now, we’ve gone through who an influencer is and how your brand can benefit from collaborating with them. But let’s spend a minute on understanding the concept of influencer marketing as a whole. For starters, this is not a new concept at all. If you are an established brand with a big budget, you have probably been doing this all along in the form of celebrity endorsements.

You pay a famous person to put their vote of approval on your brand and compensate them for it. It is one of the most traditional ways of marketing a product or service. But here’s the kicker. It is different from influencer marketing in more ways than one.

Customers are moving away from traditional marketing because they understand that celebrity endorsement is a marketing strategy and doesn’t actually mean that the celebrity recommends or has even used the product or service they are endorsing. That’s why they are more inclined to find fresh voices on the internet. Voices that are talking about the product or service after giving it a go. This channel of voices used to come in the form of reviews on platforms like Yelp.

But, over time, they have started making the same associations with their favorite influencers on these platforms because that follower base is more often than not filled with people who either have the same questions as the individual or the answer to their questions. Influencers are also perceived to be regular people, unlike celebrities who are likely to be from a different class of people than the guy on the street.

So, here are a few ideas in any brand’s starter kit when it comes to collaborating with an influencer on a social media platform.

Paying the individual for sponsored posts that are clearly marked as such.

Giving them exclusive access and striking a deal with them to post X number of reviews which increases brand awareness and reach.

This is a huge financial bargain compared to traditional channels of advertising, not only because the terms and conditions can be adjusted depending on the goals of a specific campaign, but also because influencers are all about flexibility. Even when their focus is on making money, they strive to stay authentic with their followers. This is why your (potential) customers might be inclined to doubt big celebrities but will trust social media influencers who they perceive to be more like themselves.

Now, it is important to remember that some collaborations are not going to get you tangible results, meaning they will help you improve your brand recognition, which cannot always be measured. You might end up making 10 videos with an influencer instead of a short television ad. But rest assured that your influencer is likely to get you more engagement than the television advertisement.

In the introductory chapter, I also touched upon the importance of picking the right influencer for your brand. This is an interesting aspect of influencer marketing. Now, these minor celebrities can be found anywhere on the internet. That is part of the thrill and the challenge of finding them.

Typically, what makes them an “influencer” is the size of their following on social media. But that size can vary from hundreds to millions of followers. So, don’t get hung up on the numbers alone. Don’t count on their accounts being exceptionally jazzy either.